← more from
BERTHOLD records
Get fresh music recommendations delivered to your inbox every Friday.
We've updated our Terms of Use. You can review the changes here. 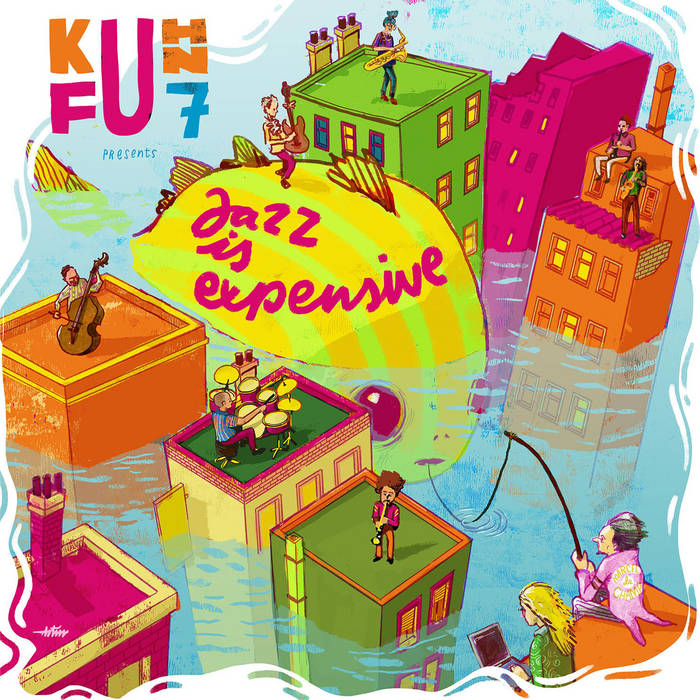 After hundreds of shows and thousands of kilometers on tour, KUHN FU celebrates its 10th anniversary with a bang: The double album "Jazz is Expensive/Live in Saalfelden" will be released on October 14th by BERTHOLD records.
Not only the band name is martial. In their "paranoid prog-punk-jazz performance", the band KUHN FU of guitarist, composer and master of ceremonies, Christian Kühn, turns everything through the improvisational wolf. Zappa meets cabaret, surf sounds and metal riffs ride the Chattanooga Choo-Choo, while Shakespeare, Brecht and Monty Python are the godfathers.
Since 2012, the band around guitarist Christian Kühn has developed a unique and very idiosyncratic form of jazz rock ( or rock jazz ), between parody and a great seriousness with which they allude to musical blinders. Kühn's international ensemble consisting of John Dikeman ( tenor saxophone ), Tobias Delius ( tenor saxophone, clarinet ), Ziv Taubenfeld
( bass clarinet ), Sofia Salvo ( baritone saxophone ), Esat Ekincioglu ( bass ) and George Hadow ( drums ) plays the compositions, which are overflowing with melodies and compositional ideas, as if their lives were at stake. The comedy that is always present in KUHN FU's music does not take away from its intensity.
On Jazz Is Expensive, Kühn tells the Brothers Grimm fairy tale "The Fisherman and His Wife" in a new and different way. Kühn's style does the rest: with a forced German accent, the story is transformed into a modern fairy tale in English. The main character is the fisherman Marcel De Champignon, a horn player who is looking for the perfect melody - "the melody that makes millions". The fish is supposed to fulfil his wish, “Bruno the Architect” is his name. The website Illsebill.com also plays a major role. How Kühn’s lyrics arise spontaneously on stage can be heard on the second CD/Vinyl of this double album, Live in Saalfelden, which features all new compositions except two old band staples Nosferatu and Maharani. The immense enthusiasm with which the musicians of KUHN FU go about their work is the same in the studio and on stage. Whether in the variations on the always extremely beautiful melodies that Christian Kühn composes as a starting point for the pieces or in the free improvisations: A perfectly coordinated band develops music from the common movement that has never been heard before.
The “Invisible Jazz Wall”, as Christian Kühn calls it, which is supposed to protect tradition from the vulgar, carnivalesque and nonsense, needs to be torn down. In this picture, KUHN FU are something like the trombones of Jericho.

Supported by Initiative Musik gGmbH with project funds from the Federal Government Commissioner for Culture and Media and Berliner Senat.

Not only the band name is martial. In their "paranoid prog-punk-jazz performance", the band KUHN FU of guitarist, composer and master of ceremonies, Christian Kühn, turns everything through the improvisational wolf. Zappa meets cabaret, surf sounds and metal riffs ride the Chattanooga Choo-Choo, while Shakespeare, Brecht and Monty Python are the godfathers. ... more

Bandcamp Daily  your guide to the world of Bandcamp

Semiratruth joins the show to discuss their latest release, "loading..".